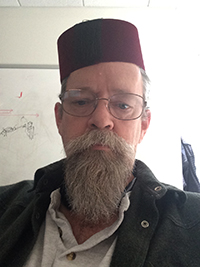 David “Zeb” Cook joined the TSR design staff in 1979, as employee #24 and through the dint of persistence rose employee #2 or 3 (in senority only) the time he left in 1994.In those years he designed such things as X1: The Isle of Dread (with the late Tom Moldvay), the D&D Expert Set, Oriental Adventures, the AD&D 2nd Edition Rules, the Conan RPG, the Indiana Jones RPG, the Escape From New York boardgame (really!), the Planescape Campaign Setting, and what must have been the personal pinnacle of his career the Bullwinkle and Rocky Party Game. After leaving TSR, Zeb entered the world of videogames where he worked on a lot of things that never saw the light of day and a few that did such as Lords of the Realm III and the City of Villains MMO. He currently works as a Content Zone Lead on the successful and entertaining Elder Scrolls Online MMO.

In addition to RPGs and MMOs, he’s a big fan of historical and not-so-historical miniatures, welding and laser cutters, bicycling, and good beer.