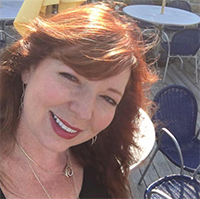 Heidi Gygax grew up around the gaming industry as the third child of Mary Jo and E. Gary Gygax.  From a young age, Heidi and her siblings worked concession stands at Horticultural Hall for Gen Con game conventions, and later worked in the TSR booth.  In her teens, Heidi began working summers at TSR, and later full time in the Gen Con department, at the Dungeon Hobby Shop, and Marketing, until the ousting of all named Gygax.  For the last 29 years, Heidi manages a dragon’s wealth in gemstones and jewelry as the Director of Customer Relationship Management for Na Hoku, a large national jewelry retailer and manufacturer based in Honolulu, Hawaii.  She has been collaborating with Jeff “Duck” Leason on a D&D module (watch for a Kickstarter in 2020) and makes the pilgrimage to Lake Geneva and her gaming roots once a year to celebrate at Gary Con with her family and friends