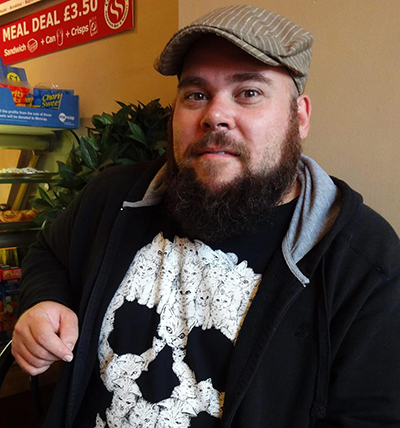 Jason Braun is a freelance illustrator who lives in an unpronounceable Wisconsin town. He graduated from UW-Milwaukee in 1998 and worked as a graphic designer for years before leaving the corporate world to focus on his art. In addition to his OSR credits, which include Gamehole Publishing, Goblinoid Games, Chaotic Henchmen Productions, Black Blade Publishing, and Pied Piper Publishing, Jason loves to create creepy horror art – just for funsies. He also writes and illustrates a semiweekly webcomic at TrollAndFriends.com.

He’s been a gamer since 1985, having cut his teeth on Mentzer’s Red Box but only after assurances that playing D&D wouldn’t make him worship the devil; because it was the 80s. Jason is a cat whisperer, an ordained Dudeist minister and enjoys camping, horror movies, and Irish whiskey.