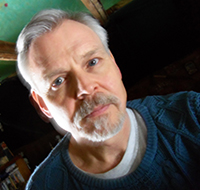 Jeff “Duck” Leason started playing Dungeons & Dragons (OD&D) in 1975, with a fellow boy scout, Skip Williams. Jeff was hooked and bought his first copy of D&D from 330 Center Street, the Gygax family’s basement. Three years later, after graduating high school, Jeff started working in the shipping department at TSR, as its 17th employee. (He was guaranteed a job at TSR by Ernie G Gygax, Jr, a high school friend and fellow orchestra member.)

Back in the early days, everyone pitched in in any way possible; from proofing to shipping. It was because of this open and creative atmosphere that Jeff was able to proof the AD&D Dungeon Masters Guide, his first accredited project. Shortly thereafter, his first solo design was the “Gateway to Adventure” catalog. Jeff worked on most every TSR product (either in editing/proofing/playtesting/layout, etc.) until the mid 1980s. His most noted TSR product was as a co-author, with Harold Johnson, on the adventure, “The Hidden Shrine of Tamoachan” (rated the eighth best AD&D adventure/module of all time).
In 1986, Jeff’s time with TSR was over; he was “let go” along with 149 other TSR employees.

In late 1986, Jeff started at Mayfair Games, and was soon in the editing department, working in a creative atmosphere, not unlike that of early TSR. He became Productline Coordinator for both the Role-Aids and Chill role-playing game lines. Mayfair bought the Invincible Overlord and Chill trade marks and asked Jeff to make them new, different products. The City-State of the Invincible Overlord was part of his AD&D campaign, active since 1976, and Chill was completely rewritten by Jeff and Lou Prosperi. It was during this time that Jeff designed the Invincible Dragon for Grenadier Miniatures/Mayfair Games tie-in and also suggested many more minis that were later released (ie. cyclops skeleton, skeleton w/skeletal dog on chain, etc.)
In 1991, after attending 100+ conventions and living and breathing gaming for over 13 years, and, due to a family illness, Jeff moved to the Northwoods of Wisconsin and disappeared from the gaming industry.

Jeff is back in the industry and ready to game. His first accreditation will appear in an adventure, The Forgotten Dungeon, from Eddie Jonas and Fireside Games, and is working on a 2019 Kickstarter AD&D adventure, “The Hauntings’ End”.