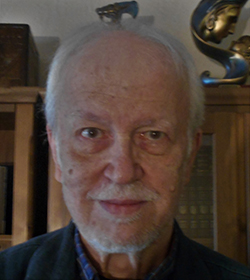 Kim Mohan was a newspaper reporter when he first met Gary Gygax in 1979 to interview him for a feature article in the Milwaukee Sentinel. Turned out to be the start of something.

Their paths crossed a few more times over the next decade or so, starting when Kim joined the staff of TSR Periodicals later that year. He eventually became the editor of Dragon Magazine, responsible for (among a zillion other things) handling Gary’s “From the Sorceror’s Scroll” columns every month. Kim accepted an opportunity to be the editor of Gary’s original “Gord the Rogue” novels for TSR, and in 1987 Gary asked him to depart Dragon Magazine and join a new company he was forming. Their times of working together ended unceremoniously when New Infinities closed its doors, but they remained friends afterward.

After a brief foray into freelancing, Kim was rehired by TSR. The second stage of his career included a stint as a game editor and three years or so as the editor of Amazing Stories. He was working on the Alternity game in 1997 when Wizards of the Coast acquired TSR. After he moved to Seattle, Kim enjoyed a second term as editor of Amazing Stories when Wizards revived the magazine . . . and returned to game editing when things didn’t work out. He eventually rose to the position of Managing Editor of RPG R&D, meaning that he had a direct hand in producing virtually every D&D rulebook or supplement for v3.5 and 4th edition.

Kim retired from Wizards of the Coast in 2013 but continues to ply his trade as a freelance editor for several publishing companies. He and spouse Pamela are happily ensconced in Mohan Manor, atop a small hill in south Seattle, from where the view of the Cascades on the horizon never grows old.