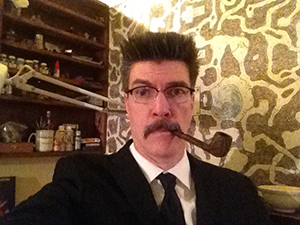 Pat Kilbane was bitten by the roleplaying bug in 1979 with the Holmes D&D Basic Set. He is creator of the YouTube channel Dorks of Yore, host of the web series RPG Science, and director of an upcoming documentary about Gary Gygax and the creation of Dungeons & Dragons.

Beginning his career as an actor, Pat spent three years as a series regular on Fox’s Mad TV. He also played the Anti-Kramer in the Seinfeld episode “The Bizarro Jerry” and guest starred in films such as Evolution, Semi-Pro and Day of the Dead. Now a writer/director, Pat penned the zombie book The Brain Eater’s Bible (St. Martin’s Press) and spent two years under contract with Dreamworks developing science-fiction concepts for television.