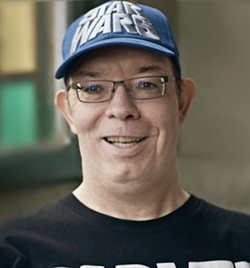 Bill is a writer and game designer who has contributed to some of the largest intellectual properties in science fiction and fantasy, including Star Wars, Dungeons & Dragons, and The Elder Scrolls. He has worked for West End Games, TSR, Inc., Wizards of the Coast, and Zenimax Online Studios, among others, and served as the Director of R&D for the Dungeons & Dragons brand for fourteen years. His long list of credits includes The Star Wars Sourcebook, A Guide to the Star Wars Universe, Torg: Roleplaying the Possibility Wars, the Alternity Science Fiction Roleplaying Game, D20 Modern, D20 Star Wars, Council of Wyrms, Eberron, and the Castle Ravenloft board game. Bill’s most-recent book, Defining a Galaxy, details the history of the Star Wars Roleplaying Game, and he currently serves as the Lead Writer for The Elder Scrolls Online video roleplaying game. He lives in Maryland with his wife, editor Michele Carter, and his faithful cat, Mouse. Follow Bill @slavicsek on Twitter or on his website at billslavicsek.com.