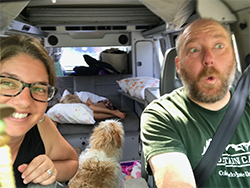 Harley Stroh cut his teeth running Keep on the Borderlands for his brother and their parents at the age of eight. Since then he has published nearly 50 adventure modules, short stories, campaign settings, and gaming supplements, and has written for Goodman Games, Wizards of the Coast, Dave Arneson’s Blackmoor, and the Hobonomicon. He eagerly awaits the release of Dungeon Crawl Classics #100: The Music of Spheres (is Chaos) and is hard at work writing adventures for Goodman Games’ Dying Earth and Empire of the East lines, as well as contributing to David Baity’s Dark Trails RPG.

But — in his heart of hearts — he really just wants to write an adventure worthy of a Doug Kovac’s cover.

When not missing deadlines for Goodman Games, Harley is falling down on concrete at the nearest skatepark, or is broken down in the desert in a VW bus, with his family and their dog.