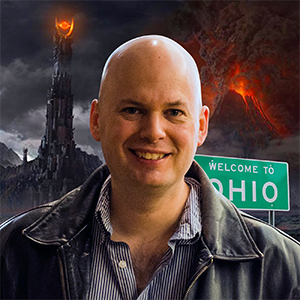 Leading the nation in the consumption of both Coke Zero and cows, Tom Tullis hails from Ohio, where the natural terrain was so excruciatingly dull the young artist vowed to one day design and print his own. Tom founded Fat Dragon Games in 2005 and has led the industry in print-and-play terrain and miniatures for over 15 years. He has been a D&D fanatic and wargamer (not necessarily wargame winner) for 38 years.

During much of that time he worked as a military history artist, illustrating over 150 books and serving as the official profile artist for the National Aviation Hall of Fame for a decade. He is also the creator of the groundbreaking web series Tomb of 3D Printed Horrors, which teaches newcomers the finer points of creating their own 3D printed terrain and miniatures. Tom is a member of the rumored secret society known as Cow-Con, whose members are a savage pack of carnivores who meet in secret to eat medium-rare steaks to ward off the wrath of the Elder Gods. He currently resides in the uncharted territories of Ohio where he plots his evil machinations for world domination.