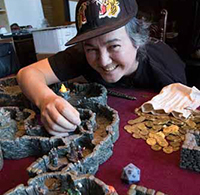 Stefan Pokorny is a fine artist and former art teacher who began running 1st edition D&D games around the tender age of 14 years old.   In 1996, he founded Dwarven Forge, a Miniatures Terrain company that started slowly but would go on to fund 4 hugely successful Kickstarter campaigns. He has run his “Theatrical” D&D games at various conventions, including GaryCon, GameHole Con, ConnectiCon, and others.

He has been featured in several documentaries: The Dungeons and Dragons Experience by Jesse Spiro and Enter the Dungeon by Richard DiNardo. In 2016 he was the subject of Josh Bishop’s Documentary Film: The Dwarvenaut (now available on Netflix).  Due to the success of The Dwarvenaut, he has been mentioned or has been the subject of articles in Forbes, New York Magazine, NY Daily News, The Brooklyn Paper, The Brooklyn Ink, DNA-info New York and has been invited to talk at the Barney School of business, and AOL talks.

He is the original creator of the fantasy world of Mythras and the City of Valoria. With the help of others, he has put forth the module: Tapestry of Deceit and published a book of Cartographic Maps and Dungeons. His latest dream is to release the Mythras Campaign sourcebook to the world!