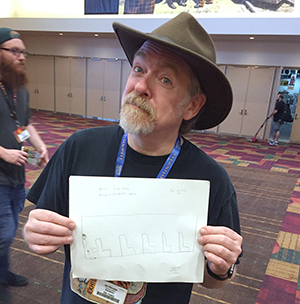 Jim Wampler is currently a partner at Frog God Games in charge of special projects, and author of the forthcoming MegaHeroes RPG. Jim has also written Mutant Crawl Classics RPG and several DCC RPG and Metamorphosis Alpha adventures for Goodman Games. Jim Wampler is the creator of the Marvin the Mage gaming comic, and has contributed cover art and comics to the Knights of the Dinner Table magazine.

Jim lives in Cincinnati, Ohio where he stays up on cutting-edge AI research so that he can the first in line to have his consciousness uploaded to the singularity.