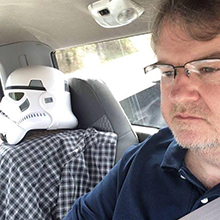 What GaryCon Means To Me

I clearly remember the first time I actually saw a Dungeons and Dragons product.  It was in the winter of 1979 and I was in a Woolworth’s department store in Omaha, scouting for potential Christmas presents.  At about eye level, in an aisle with nothing else interesting, was this strange gray/blue box with an amazing red dragon on the cover.  I had heard some buzz about D&D and, being a fan of films like The Norsemen, Warlords of Atlantis and Message from Space, knew this was something I had to try.  I did receive the set as a Christmas present and shortly thereafter found a local group to play with.  By spring I had graduated from the Holmes box set to Advanced Dungeons & Dragons.  A short time later I became a member of our school’s active RPG club.

Gary Gygax’s work has been a stalwart companion for most of my life.  D&D (or some other TSR product) has been my constant companion for 11 moves across 6 states (and 2 continents).   Gaming has helped me make new friends at both Jr. High and High School, in College, at several duty stations while in the ARMY, at conventions, and even inside my own family – when my somewhat estranged son came to me a few years ago, wanting to show me the cool game (with funky dice) he had learned about at school.

I don’t regret a single moment spent playing RPGs.  I’m still in touch (through the miracle of social media) with quite a few of my fellow adventurers from early on.  The weekend before I was scheduled to leave California for basic training, I had to choose between a few days at a motel with my girlfriend or wrapping up a long running Greyhawk campaign with my fellow adventurers. Boy was she mad at me.  She finally broke up with me via letter when we started discussing working her plans for my pending leave (between training and my first duty station) around my gaming schedule.

I do have a profound regret.  I regret not making the pilgrimage to GenCon or to some other Con to meet Gary in person.  When I was a kid it was always too far away or beyond my means financially.  But, once I was a “grown up” and had the resources, it was easy to put off the journey since there would always be time to do it later.  I regret not paying more attention to the passage of time and not realizing that my window of opportunity to meet the great man would slip away.

I guess that is why GaryCon is so special to me.  It is, of course, a time to gather with friends and like-minded adventurers.  It is also a time for me to listen to tales told by Gary’s family and friends and get some inkling of what made him truly special.  Sometimes, when gaming in one of the halls at GaryCon, I will close my eyes and let the sound of battles won, dragons challenged and treasure found, wash over me and imagine that it is all a part of Gary’s voice.  It is the closest I will ever come to shaking his hand and thanking him for all the great memories.
Erik Garland