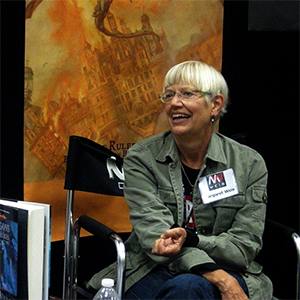 Located in the Prefunction Hallway near the Dealer Hall.

If you have been living under a rock and don’t know who Margaret is:

At TSR, Weis became part of the DRAGONLANCE® design team. Created by Tracy Hickman, the Dragonlance world has continued to intrigue fans of both the novel and the game for generations. Hickman and Weis wrote the first of many fantasy novels, the DRAGONLANCE CHRONICLES, which are still in print after almost thirty years. The books have sold over twenty-five million copies worldwide.

Weis is the author/co-author of several other New York Times best-selling series, including DARKSWORD, ROSE OF THE PROHET, STAR OF THE GUARDIANS, THE DEATHGATE CYCLE, and DRAGONSHIPS. Weis and her daughter, Lizz, have written two paranormal romance novels, WARRIOR ANGEL and REBEL ANGEL, published by Daw. Her newest world is written with co-author, Robert Krammes – The Dragon Brigade. SPYMASTER, is the first volume in the new series, Dragon Corsairs, which will be published March 21, 2017.